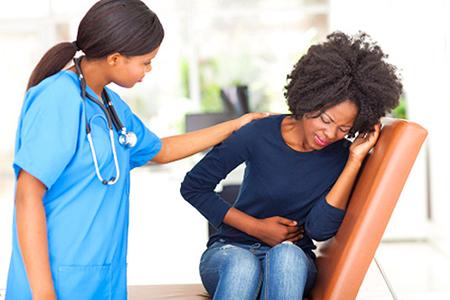 What is Crohn's Disease?

Crohn’s disease is an inflammatory bowel disease (IBD). As the name implies, inflammatory bowel diseases cause inflammation of the intestinal tract. The intestinal tract includes your mouth, esophagus, stomach, small intestine, large intestine (colon), rectum, and anus. .. Read more
The inflammation and irritation of Crohn’s disease can occur anywhere in the gastrointestinal (GI) tract but is most common in the lower portion of the small intestine (the ileum). It is sometimes called regional enteritis because diseased areas are often interspersed with healthy areas—in other words, they only affect some regions of the GI tract.
Crohn’s disease is a chronic condition. That means it persists for a long time. There is no cure, and it usually does not go away on its own. Periods of remission, which are times when you have no symptoms, are typical.

Who Gets Crohn’s Disease?

Crohn’s disease can occur in anyone at any age. It affects men and women equally. It most commonly begins between the ages of 13 and 30.
Smokers are more likely than nonsmokers to develop Crohn’s. If you have Crohn’s and smoke, you are likely to have more severe symptoms. People of European Jewish ancestry have an increased risk of Crohn’s, and African Americans have a decreased risk. However, the number of African Americans developing this disease seems to be increasing. Crohn’s is more common in developed nations and in urban areas. As many as 700,000 Americans may be affected by Crohn’s disease, according to the Crohn’s & Colitis Foundation of America.

The Types of Crohn’s Disease

There are a number of inflammatory bowel diseases. The most common are Crohn’s disease and ulcerative colitis. Both involve inflammation of the digestive tract. Ulcerative colitis affects the innermost lining of the colon and rectum. Crohn’s disease can affect any part of the GI tract and often involves the entire thickness of the wall of the intestinal tract. The two illnesses have similar symptoms—diarrhea, pain, bloody stools—and similar treatments.

Aminosalicylates
If you have mild or moderate Crohn’s, your doctor will likely prescribe aminosalicylates to reduce inflammation and ease symptoms. Sulfasalazine and Asacol are the most commonly prescribed medications.
Olsalazine (Dipentum) and Balsalazide (Colazal) are two other medications that have been developed. These medications can be taken by mouth, as a suppository, or as a combination of both, depending on where the disease affects your body. Doctors normally prescribe these types of medications as long-term therapy to keep Crohn’s in remission

No one knows the exact cause of Crohn’s, but researchers believe it’s caused by a problem with your immune system. Cells that normally protect your body “attack” the GI tract. Because of this, medications that suppress or regulate your immune system can help.
Sometimes doctors will prescribe these medications if aminosalicylates and corticosteroids aren’t effective or if you develop fistulas. These medications can help your disease stay in remission and may even heal fistulas.

Some common immunosuppressive medications are:

Biologics are a new type of drug used for people with moderate to severe or active Crohn’s. Your doctor may prescribe biologics if other medications aren’t working, or if you have openings, or fistulas, in your GI tract. They can also be given to help ease you off of steroid medications.
These medications are given intravenously (IV) or by a shot on a regular basis. They work to reduce inflammation in specific areas, such as the lining of your intestines, rather than suppressing your whole immune system.